The fullness of life cannot be measured or experienced by reading words on a screen – it must be lived.

The women traverse slowly and methodically across the shallow turquoise surf. Their rainbow khanga (skirts) drag in the receding tide and becoming heavy masses that they continuously attempt to hoist up above their knees. Clutching empty plastic buckets the women bend at their hips and peer over their toes to the white ocean floor, a few inches below the surface. With every few steps they plunge their hand into the water, stand up straight, deposit the catch in the bucket, shake off their wet arm and continue on their search. Offshore, where the turquoise water becomes a shade darker, anchored dhows (wooden sailboats) drift about in a sleepy stupor. A nearby heron dances with a long worm he has plucked from the fine sand; the women are not the only ones benefiting from the receding tide. 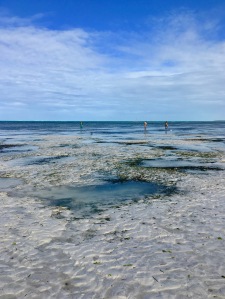 The women work in clusters of twos and threes, laughing and yelling at each other in Swahili- words that I have still yet to learn. I stand back on the growing mudflat that is expanding as the tide continues to run away. It exposes patches of seagrass and carved out puddles. The sand here is fine and laden with water. It is deceivingly welcoming, the kind of mud that would surely steal my shoes- if I were wearing any. I give myself a moment and let my toes, feet and then ankles sink in. I let the overwhelming feeling of being here, on the east coast of Zanzibar in a small village called Jambiani, sink in. 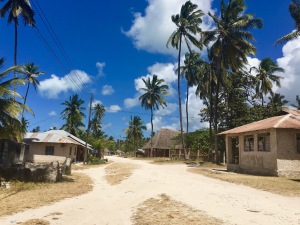 Just a few days ago I was back in the bustling mainland city of Dar es Salaam, hunched over my computer at the University reading about these women. Perhaps not the exact women standing in front of me, but of the women on the east coast of Zanzibar who collect gastropods and bivalves from intertidal areas, an act known as gleaning.

My interest in marine biology and gender equality has led me to the coast of Tanzania to complete an internship with the Memorial University of Newfoundland and the University of Dar es Salaam. Since arriving in Dar es Salaam a month and a half ago, I have read much about the different challenges Tanzanian women face in fisheries and aquaculture.

As many studies and statistics are heavily focused on men’s nearshore and offshore fisheries, women’s role in gleaning fisheries is often overlooked. While some of the catch is sold and contributes to income generation, much of the women’s catch is for sustenance and, therefore, plays a vital role in terms of food security. Male gleaners often collect high value species such as sea cucumber in deep waters off shore. Female gleaners face several challenges that limit them to collect lower value species in nearshore habitats. Women have limited access to boat transport and alternative gear such as snorkels and spears for diving and do not have sufficient or similar swimming skills to men. Moreover, women have increased household duties which leads to less time available for fishing. It is clear that these challenges are in play as it is only female fishers I see in the shallow intertidal zone close to the village.

The following afternoon I meet with Dr. Msuya, a research scientist at the University of Dar es Salaam Institute of Marine Sciences in Stone Town, back on the west coast of Zanzibar. Dr Msuya studies seaweed farming in Zanzibar, an activity preformed mainly by women in the shallow intertidal zone. She stands in the middle of her office, uncoiling a long, black tubular net that sits on a spool beside her desk. She explains to me that increased ocean temperatures due to climate change, has caused complete crop failure of the particularly valuable species Kappaphycus alvarezii. She is currently piloting a project in two villages that aims to reintroduce the farming of Kappaphycus alvarezii by setting these tubular nets deeper in the ocean, where the water is cooler. Despite the background noise of the phone ringing and people coming and going throughout our meeting, Dr. Msuya’s determination is clear. I leave her office, a quiet air conditioned haven, and walk back through the hot, narrow maze of alleys to my hostel with a head full of inspiration and excitement.

Later, over a steaming bowl of urojo soup before my flight back to Dar es Salaam, I decide I must return to Zanzibar. Though I had hoped to visit the seaweed farms during this trip, the tides decided otherwise. I decide that my next visit will be planned around the tide table. The fullness of life cannot be measured or experienced by reading words on a screen – it must be lived. 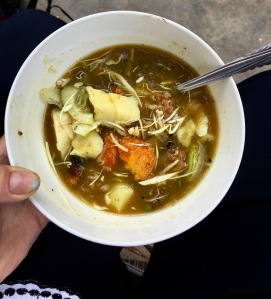 One thought on “High Time for High Tide Learning”

Marine Institute of the Memorial University of Newfoundland