Resilience, high spirits and acceptance are traits of my new found friends

I am one of the many “Maria’s” living in the Philippines and unlike most, I’ve been here for only one month. New routine takes some getting used to but I still enjoy my Jeepney ride to and from work. Maybe it’s because I am happiest when I am in motion or faced with a new challenge. As a Newfoundlander born and bred I’m adaptable to harsh conditions but I’ve always had the luxury of ample free space. The “jeepney” is a mode of transport that looks like a shrunken jeep limousine and seriously lacks space. Sometimes it is full with 20 people hip to hip on bench seats. When the monsoon rains come and the plastic sides are rolled down it is quick to fog up in tight quarters.

Not far from the congestion of the city and just a 15-minute boat ride through the Panay Gulf I have access to a mountainous Guimaras, a tiny island coined the “Mango Capital of the World”. Last week 8 of us bikers took to the remote landscape on the island to chart a trail for an upcoming mountain bike event called Padyak Kalikasan which translates to “­­­foot stomping for nature” on August 26th. Each year and sometimes multiple times there is a lengthy trail ride though the back woods on the island. Arriving by boat at 6am we trekked uphill for 10kms to the trail head. Already soaking wet from rain on the way it seemed like an impossible day. Upon starting steep hills, muddy patches and watery fields greeted us. The shelter of the trees and the comfort of bird songs made the experience feel like a Studio Ghibli film. Every so often we passed homes speckled along our path. Each household appeared self-sufficient because of the surrounding edible gardens, free-range chickens and curious goats. The open spaces between tight knit trees consisted of rice fields and waterlogged grass plots where cows and water buffalo plodded, happy and full. The landscape was breathtaking and if it wasn’t for the rain I would have taken more photos along the way. 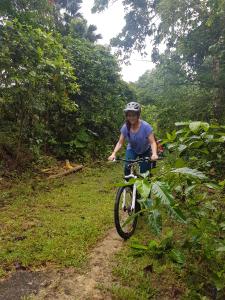 Time flew as we biked 15 km until our GSP guide, Mhar Esmaña realized there was something wrong with the location signal. We backtracked for 5km to try the alternate route. The rain had let up and it was perfectly overcast. The mud soaked on our legs and the spray from the trail kept everyone cool despite the change in plans. After riding for an hour on flats and downhill we found ourselves on top of a farm scape plateau overlooking a lush valley. The fact that we ended uphill after riding downhill pays tribute to the magic of Guimaras. Still, with a designated commute distance we needed to chart the trail for another 15kms. A downhill stretch led to a gushing river 30 feet wide where the rains overtook a road. Without hesitation William Garcia hiked his bike up and proceeded to cross. The rest of us followed while balancing our bikes on top our heads mimicking head porters. After the pass and a swift 5km ride we came to another road washout, this time it was chest deep. The road was impassable. It was 11am and the mantra for that period was “low bat” meaning low battery as we were running out of energy. A side road was taken and we hit the concrete streets of Guimeras. A luxurious ride downhill to an open air restaurant marked completion of our morning adventure. There, we ate all of the rice the restaurant had. Literally.

Resilience, high spirits and acceptance are traits of my new found friends. Frames of metal and rubber brought us together. I can’t wait to ride Padyak Kalikasan on the 26th with my tough as nails biker gang.

Marine Institute of the Memorial University of Newfoundland